In many circumstances, companies are required by federal law to make exceptions to their usual rules or choices to allow candidates and workers to observe spiritual dress and grooming practices. Title VII of the Civil Rights Act of 1964, 42 U - corporate uniforms.S.C. 2000e, et seq - corporate uniform supplier., as modified (" Title VII"), restricts companies with at least 15 employees (including personal sector, state, and regional government companies), in addition to employment service, unions, and federal government firms, from discriminating in work based upon race, color, faith, sex, or nationwide origin. It also forbids retaliation against individuals who complain of discrimination or take part in an EEO examination. 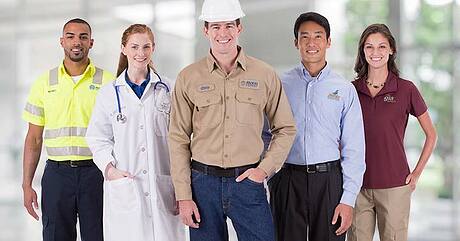 There might be state or local laws in your jurisdiction that have protections that are parallel to or more comprehensive than those in Title VII. Yes. Title VII secures all elements of religious observance, practice, and belief, and defines religion extremely broadly to consist of not just conventional, arranged religions such as Christianity, Judaism, Islam, Hinduism, Buddhism, and Sikhism, but likewise religions that are brand-new, unusual, not part of an official church or sect, only registered for by a little number of people, or might appear illogical or unreasonable to others. Spiritual practices may be based on theistic beliefs or non-theistic moral or ethical beliefs as to what is ideal or incorrect that are seriously held with the strength of traditional religious views.

Moreover, an employee's belief or practice can be "spiritual" under Title VII even if it is not followed by others in the same religious sect, denomination, or churchgoers, and even if the employee is unaffiliated with a formal religious organization. The law's protections also extend to those who are discriminated against or need accommodation due to the fact that they profess no religious beliefs. For example, a company that is not a spiritual organization (as lawfully defined under Title VII) can not make employees wear religious garb or posts (such as a cross) if they object on grounds of non-belief. Because this definition is so broad, whether a practice or belief is religious typically is not disputed in Title VII religious discrimination cases.

Title VII uses to any practice that is inspired by a spiritual belief, even if other people might engage in the same practice for nonreligious factors. Nevertheless, if a dress or grooming practice is an individual choice, for instance, where it is used for fashion rather than for religious factors, it does not come under Title VII's faith defenses. Title VII's accommodation requirement just applies to religions that are "sincerely held." However, even if a person's spiritual practices might differ commonly-followed tenets of the religious beliefs, the company should not immediately assume that his or her religious observance is not genuine.

Therefore, like the "spiritual" nature of a belief or practice, the "sincerity" of an employee's specified religion is generally not in conflict in religious discrimination cases. Nevertheless, if an employer has a genuine reason for questioning the sincerity and even the spiritual nature of a particular belief or practice for which accommodation has actually been requested, it may ask a candidate or staff member for information reasonably required to examine the request. Eli has been working at the Burger Hut for two years - corporate uniform manufacturer. While in the past he has actually always used his hair short, he has just recently let it grow longer.